We think the Thyrm Switchback handheld flashlight ring and pocket clip is a great idea, however they don't work on the smaller diameter Streamlight flashlights that we use regularly. They are primarily made for the thicker diameter Modlite and Surefire handheld lights.  Although it's a little large to carry in a pocket every day, we recently purchased the larger Streamlight HL-X that is supposed to work with a Switchback, so we picked up a Switchback 2.0 for it, but ended up being very unhappy with the way it fit onto the flashlight.  We also did not like that the pocket clip was placed 180 degrees away from the ring, as it did not work well with the specific way we carry flashlights in our pocket. So... we decided to try making our own flashlight ring with an integrated pocket clip out of kydex, since we have plenty of it around for holster making purposes.  We must've made and carried 20+ different prototypes before getting to what you see below to find the most versatile solution while keeping it as simple as possible for ease of installation and a minimal amount of separate parts (this design is limited to what can be done with kydex in this particular application).  Our flashlight ring/clip can be made from any color/texture of kydex that we stock or can order, and it also can be made for just about any diameter flashlight up to 1" (why would you want to pocket carry a flashlight thicker than 1" diameter?).  It's also easy to install and adjust with only one screw, and it won't scratch up the finish of the flashlight like metal clips do. The unique coiled ring gives you the versatility of two different ride-height options, so that it will work for multiple carry preferences. It gives the average concealed carry person the ability to:
1 - Deploy the light quickly by using the ring
2 - Utilize a two-hand grip on a handgun while using the light
3 - Chose between two different ride-height options based on personal preference
4 - Convert your flashlight into a cool tactical "fidget toy" 😁

The pocket clip is obviously not a spring loaded clip that will pinch fabric, but just allows you to "hang" the light on the edge of the pocket fabric as you can see in the examples below.

Disclaimer: This was NOT designed as a "duty" style ring, as it is made of kydex and will most likely not stand up to extreme usage like a molded polymer product.

We are currently making them for the Streamlight ProTac 1L-1AA, the 2L-X, and the HL-X (all pictured below), but they can be made for just about any diameter flashlight body up to 1". 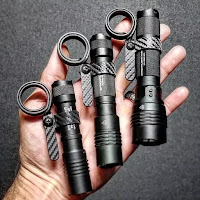 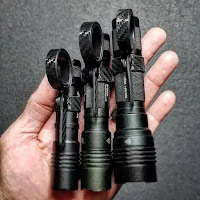 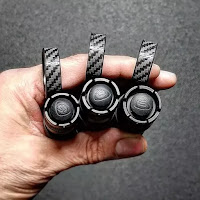 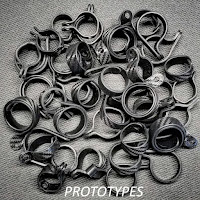 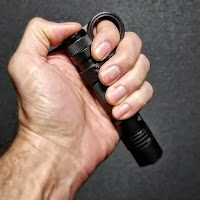 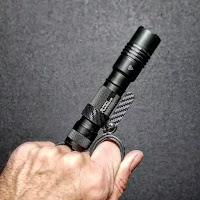 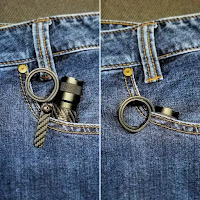 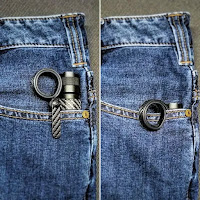 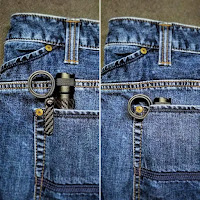 Check out our website for more details and pricing on all of our products!
http://www.rfvtactical.com/
at January 22, 2022 No comments:

With the much anticipated release of the new Inforce WILD1 compact weapon light and no other new compact lights slated to come out in the near future, we thought we would compare the latest offerings of the most popular compact lights. These lights include:
Olight Baldr S and PL-Mini2
Streamlight TLR-7A/TLR-7sub
Nightstick TCM-550XL/XLS
Inforce WILD1 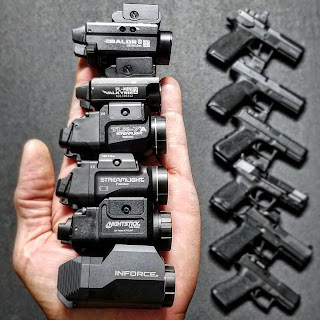 RFV Tactical makes holsters for these lights mounted to several popular compact and subcompact handguns (see the list of guns here), so we own and have experience with all of these lights. We are not going to comment on the durability or reliability of any of these lights because several of them are fairly new to the market and long term testing just isn't feasible at this time. We won't go into as much detail with these compact weapon lights as we did with our full-size weapon light blog post, but we wanted to at least give some comparison of the light output of each light. The size, switch activation, fitment, and price are all very similar with these lights, so we won't go over those aspects with much detail in this post. The photos below were taken with brand new batteries installed or freshly recharged.
Olight Baldr S
The Olight Baldr S is the company's newest compact weapon light offering and is slightly larger than their popular PL-Mini2. It also includes a green laser sight that is projected from inside the bezel of the light, so there is no extra "wart" hanging down from the body of the light to accommodate the laser. While this light is not as aesthetically pleasing to the eye as some of the other compact weapon lights, it's performance is actually really good! It is rated at 800 lumens, but it's probably closer to 600 lumens which is still brighter than all the other compact lights.  It also has the widest spill of all the compact lights. The fact that it also has an easily selectable green laser is a nice bonus to an already great performing light. A unique thing about all of the Olight compact weapon lights is their adjustable rail mounting mechanism with a quick release lever that allows you to easily mount the lights to a very wide variety of handguns. We don't really like the aesthetics of this adjustable mount as it spaces the body of the light farther away from the frame of the gun, but we appreciate the versatility of it. As with almost all current Olight weapon mounted lights, it's rechargeable battery is not removable, so when the light is in need of a charge, it is out of commission for several hours while it's attached to a special USB charger. It's probably a good idea to buy two of these lights and keep one on the charger ready to swap out when the one mounted to your gun dies. 😏 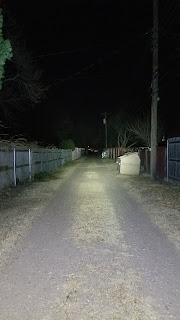 Olight PL-Mini2
The Olight PL-Mini2 has been around for a couple of years now, but is still a current and very popular compact weapon light despite all the negativity associated with Olight on various internet gun forums. It is rated at 600 lumens but is probably closer to 400 lumens. As with the Baldr S, it's not very aesthetically pleasing to the eye with it's adjustable rail mounting mechanism (although it is smaller than the Baldr S), and it also has a rechargeable battery that is not removable.  Better buy two of these lights too! 😁 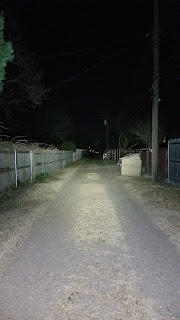 Streamlight TLR-7A
The Streamlight TLR-7 has been around for several years, but the "A" version came out to address the consumer dislike for the activation buttons being on the sides of the original version which placed the buttons slightly out of reach for a lot of people. The newer 7A has improved switches that come back farther towards the trigger guard area and includes two different style of buttons/paddles for your preference. The original version with side buttons is still available for those that like those switches. This light is rated at 500 lumens and performs as good as you would expect from a Streamlight, but it does not have as far of a throw as some of the other compact lights. 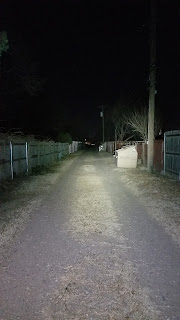 Streamlight TLR-7sub
The Streamlight TLR-7sub is a slightly smaller and sleeker version of the TLR-7A that was made specifically for subcompact handguns.  It comes in three different versions: "GL" for the Glock 43X/48 MOS, "SIG" for the Sig Sauer P365/X/XL, and "1913s" for the Springfield Hellcat, but the 1913s will also fit several other subcompact and compact handguns that have a 1913 picatinny accessory rail. It's performance is nearly identical to the 7A, but appears to be slightly brighter than the 7A as it's light output is a little more white in color temperature. 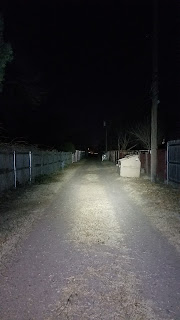 Nightstick TCM-550XL/XLS
The Nightstick TCM-550XL and XLS (strobe) appears to be a clone of the Streamlight TLR-7A with some subtle differences, but actually has slightly better light output than the 7A. This light has a nice white output of 500 lumens with a good amount of throw. One weird quirk to this light is that there is a split-second delay when turning the light off from the momentary-on mode.  Not a major issue (more annoying than anything), but worth noting. 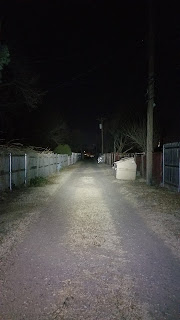 Inforce WILD1
The Inforce WILD1 is brand new to the market as of the date of this blog post. The WILD1 is the company's new and improved replacement for the long discontinued APLc compact weapon light that was very popular despite only having 200 lumens and being plagued with flickering problems when they first came out. It has the same overall appearance as the APLc, which is subjectively a very good looking light, but is a little larger than the APLc, so it won't fit any holsters made for the APLc.  It's also made out of aluminum instead of polymer like the APLc, so it should be more durable. The 500 lumen output is good, but it has the most narrow hotspot of all the compact weapon lights. This makes it seem not as bright when used indoors, but it has the farthest throw of all of the compact lights. 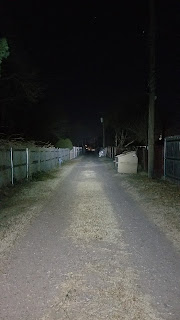 As we mentioned in our full-size weapon light blog post, regardless of which weapon mounted light you use (or don't use), we recommend that you ALWAYS carry a good handheld light with you.
Check out our website for more details and pricing on all of our products!
http://www.rfvtactical.com/
at January 10, 2022 No comments:

We think the Thyrm Switchback handheld flashlight ring and pocket clip is a great idea, however they don't work on the smaller diameter...

Chuck Brazeau
It's pretty much about guns, knives, motorcycles, and sports cars for me...